Thailand puts up Countdown for Oscars 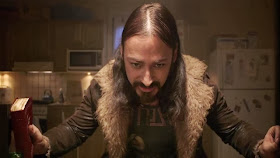 Directed by Nattawut Poonpiriya and produced by the GTH studio, Countdown is about a trio of young Thai hipsters in New York who are trapped in their apartment and terrorized on New Year's Eve by an unhinged drug dealer named Jesus.

The film has been a hit on the festival circuit and won awards at home, particularly for actor David Assavanond as the goateed pusher.

Countdown is perhaps a surprising choice for Thailand's Oscar submission, but then perhaps not with GTH chief executive Visute Poolvoralucks currently heading the industry's Federation of National Film Associations of Thailand, which handles the Academy Award pick.

Water-cooler talk had it that the mega-hit horror comedy Pee Mak Phrakanong, also a GTH film, might be submitted. Another contender among pundits was the indie teenage drama Tang Wong, a current critical favorite that touches on Thai traditional dance – an element that made it seem like a shoe-in for the Thai Oscar pick.

But in the end, it was Countdown, which was released in Thai cinemas last December. It's GTH's third submission, following the The Tin Mine (มหา’ลัย เหมืองแร่) in 2005 and Best of Times (ความจำสั้น แต่รักฉันยาว) in 2009.

Thailand's pick joins several other Southeast Asian entries, including a handful of films from countries outside the region.

Australia is submitting The Rocket, a Lao-Isaan family drama directed by Kim Mordaunt that was filmed partly in Laos and partly in Thailand and features a mostly Thai cast.

Three Tagalog films are in the running. The Philippines has submitted Hannah Espia's Israel-set immigration drama Transit, which also is in Hebrew. Singapore's pick is Anthony Chen's family drama Ilo Ilo, which also has Mandarin, Hokkien and hopefully not too much English. And the U.K. is submitting Sean Ellis' crime drama Metro Manila.

Vietnam had intended to submit the historical drama Thien Menh Anh Hung (Blood Letter), but withdrew because it wasn't released during the qualifying timeframe of October 2012 to September 30 of this year.