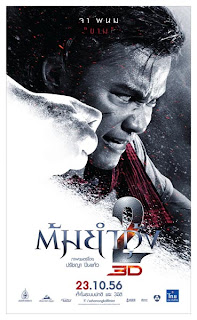 Tony Jaa has a manager, and in the fight over the Tom-Yum-Goong 2 star's signing on to Fast and Furious 7, he's blasted back at Sahamongkol Film International executive Somsak "Sia Jiang" Techaratanaprasert, saying that the studio's "exclusive" contract with Jaa does not in fact exist.

Here's the complete statement, via Twitch:

As Tony Jaa's manager I am posting this in his behalf. Tony has always had the greatest respect for Sahamongkol and the people behind Sahamongkol. He is therefore saddened and disappointed to see their recent press statements. The article that Twitch has quoted appeared in the Bangkok Post and was based solely on Sahamongkol's public comments. Sahamongkol's public assertions regarding Tony and his purported contract with them are not factual. Tony Jaa does not have a new contract with Sahamongkol nor did he extend his prior relationship with them. The matter was studied quite carefully and Tony Jaa is free to pursue any acting jobs which he wishes to undertake. Sahamongkol may make a complaint in a competent legal forum with proper jurisdiction if they feel they have such a claim. Assuming that such a claim would be heard; We would be more than pleased to follow the ruling of any competent legal authority. It should be noted that Thailand abolished slavery many years ago, and Thai courts consider provable damages in labor contract disputes, and nothing more than that. Tony is looking forward to his role in Fast and Furious 7 as well as a number of other films. He does not require permission from anyone to act in these films, except possibly his wife and daughter.
Michael Selby


Head over to Twitch to read the comments.

Meanwhile, there's a Change.org petition in support of Jaa.

And keep up with Jaa himself, who is extremely English-fluent, at what appears to an "official" Facebook page.
Wise Kwai at 7:51 PM
Share